Hello!
This book is going to blow your lid off: 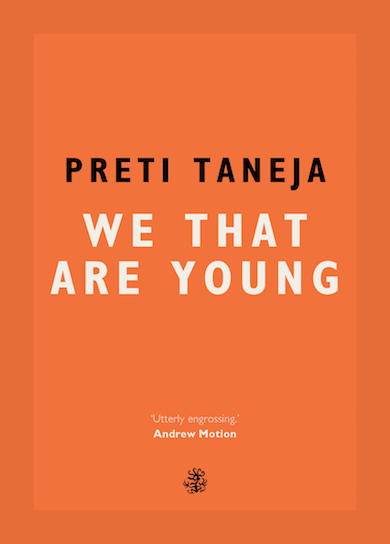 We’re proud that it’s now in our store.
Here’s the low down:
This is the story of a billionaire family dynasty, led by a gold-plated madman, stewed in corruption, mired in violence, riven by infighting, deception and lies… The resonances will be there for  anyone who knows King Lear - not to mention anyone struggling to come to terms with the new world order - from  the rise of the religious right-wing in India to the Trump dynasty in the United States. This is not just Shakespeare repurposed for our times – it’s a novel that urgently matters in 2017, and which will resonate for years to come.
Jivan Singh, the bastard scion of the Devraj family, returns to his childhood home after a long absence – only to witness the unexpected resignation of the ageing patriarch from the vast corporation he founded, the Devraj Company. On the same day, Sita, Devraj’s youngest daughter, absconds – refusing to submit to the marriage her father wants for her. Meanwhile, Radha and Gargi, Sita’s older sisters, must deal with the fallout… And so begins a brutal, deathly struggle for power, ranging over the luxury hotels and spas of New Delhi and Amritsar, the Palaces and slums of Napurthala, to Srinagar, Kashmir.
Told in astonishing prose – a great torrent of words and imagery – We that are young is a modern-day King Lear that bursts with energy and fierce, beautifully measured rage. Set against the backdrop of the Indian anti-corruption protests in 2011–2012, it provides startling insights into modern India, the clash of youth and age, the hectic pace of life in one of the world’s fastest growing economies – and the ever-present spectre of death. More than that, this is a novel about the human heart. And its breaking point.
And here’s a little of what people are saying about Preti so far:
'Utterly engrossing, very smart, very moving… We that are young is subtle, ambitious and highly original.’
Andrew Motion
‘Preti Taneja is a writer to watch, no doubt about it.’
Deborah Levy
‘Taneja writes in light bright prose that echoes Katherine Mansfield, only to surpass her.’
Maureen Freely
‘Her characters are sensuously, tangibly, present; her prose draws you in with the sureness of poetry.’
John Cornwell
Please do pre-order a copy - either the beautiful bold orange paperback version or one of our lovely limited editions, which will be printed in a one-time-only run of 500. The limited black-covers are the collector's items - the ones that are going to be worth a FORTUNE in a few years time. They are also the editions that help keep us a going concern. Every single penny we make from them is invested back into our production costs. So you aren't just buying a mighty fine book - you're helping to fund the writers of the future and the writers who matter now. 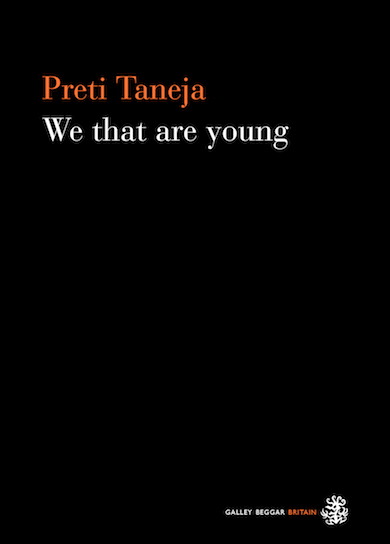 (That's a rough version of our famous black cover. Soon a juicy quote from the book will appear on there too...)
Hey! It’s quite a while since our last newsletter and since then Paul Stanbridge only went and got shortlisted for the Republic of Consciousness prize. He’s also continued to get glowing reviews. “This book is a magnificent accomplishment,” says Becky Danks over on The Contemporary Small Press website. Scott Manley Hadley on Open Pen said: “Forbidden Line wore me out, but if it was a lover, a squash game, a meal or a dog, I’d definitely consider that a good thing. A unique read, worth a go if you’re up to it.”
We also had the great pleasure of launching the book in London at the end of January. Thanks to everyone who came. And thanks to the wonderful venue, The Horse Hospital, who even let us bring our dog. Here he is licking the author: 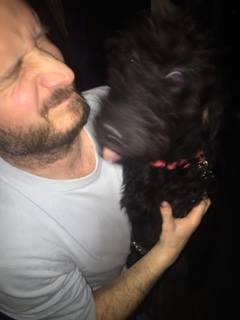 Just in case you think our dog looks ALL WEIRD, here he is in a calmer moment: 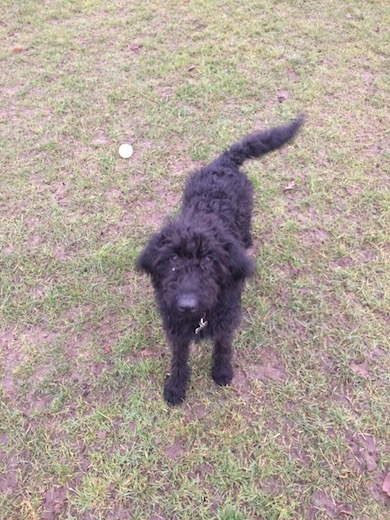 Good boy! Good boy! Fetch that ball.
Ahem.
Where was I.
Oh yes. NEWS.
I’m very proud now to direct you to our short story prize shortlist. We’ve got some superb stories on there this year. It was hard whittling them down to five, considering the quality of our longlist. In fact, talking of our longlist, they're all available as ebooks in our store now. Please do have a look if you want to sample some of the wonderful upcoming international talent writing in English at the moment. (Singles Club Members! I'll be sending the stories out to you soon too! Galley Buddies should already have recieved theirs.)
Here are a few of the covers:
The information about the final five can be found here. They are:

Well done to all those writers. (And well done too to everyone on our longlist!)

And please click on our blog so you can see what our very fine judges (and Elly and me too) have said about them.

Stand by for the big announcement of the winner on 17 February. We'll also be organising an event to celebrate these writers in style some time in March. Watch this space. The party was a blast last year. Oh and the winner will be getting a profile in The Bookseller. Our prize is turning into an excellent way to spread the word about fine writers.
Okay, regular readers of this newsletter will know I often spend a few moments in these closing words calmly and rationally setting out the case about Amazon. Well - now, the world has turned so entirely upside down that this week the thing I have to do is to sincerely and respectfully praise Jeff Bezos. He came out hard against Donald Trump’s horrifying Muslim ban - and even promised to put his money where his mouth is. It’s a measure of the times we live in when we can give nothing but respect to the Amazon overlord. Thank you Jeff Bezos. You did a good thing. You actually did. Makes me nostalgic for the days when I used to picture you laughing and killing innocent bunnies with your evil-lazer eyes and laughing again at the death of Dobby the house elf. Oh well. Things have changed now.
Talking of those *things*.
Shit, huh?
I'm guessing if you're anything like me, you're feeling a little bit frightened, a little bit ashamed and a whole load angry. A frustration that boils all the more because of a feeling of hopeless impotence. I'm lucky in that at least I have a relatively public platform where I can vent and make suggestions.  But still. I want to do more. And I'm assuming most of the readers of this newsletter will share that feeling? You are - I'm sorry to tell you - almost by definition the liberal elite. I know! We're pretty damn penniless and powerless for a so-called elite. But still. That's what we seem to be. And I feel like we should embrace it. If being the liberal elite means that we are the people who respect the thinkers, and the experts, that's okay with me. Intelligence isn't something to be ignored and disparaged. I'm old enough to remember the days when it was positively encouraged. Which is to say, only a year-or-so ago, until just before David Bowie died.
I also think we need to make ourselves heard.  This week Appeaser May put out a document stating 65million people are willing Brexit on. That's another bare-faced lie and we have to stand up to this utter balls. Over here, the next big event on the horizon seems to be the anti-Brexit march on 25 March. I promise I'll be there, feeling self-conscious about all the chanting and the madness of crowds, but holding an EU flag, nonetheless, and making sure I'm counted. It feels compulsory - especially since we now know that Brexit means Trump. I’ll be hoping to see you there. Oh and I can also recommend getting hold of some EU flags and flying them around your home town. It gives hope to those that need it. And it also annoys dumbkirkers. Which is petty, I know. But fun. And crikey knows we need some fun. Otherwise it would be like we’re living in a facist dystopia ruled over by a petulant mini-handed kingbaby and propped up by a racist old Tory with a scowl hard enough to shatter rocks. And who would want that?
Fondly,
Sam
PS Since I’ve gone off on a political one, let me put in a word for the MASTERS of the angry rant: Melville House. These publishers are one of our inspirations and  a source of keening envy. They are our compagnons d’armes, our esteemed and beloved brothers and sisters. And see how they burn! Their long-running blog Mobylives is raging hot at the moment. You can feel the fire coming off the screen. Go and read it. Go and buy their books. Go and help them fight the good fight.
PPS

As usual, I'm also going to use the end of the newsletter for a few more adverts, where you can safely ignore them, or kindly indulge me, depending on your fancy:

Firstly, please be our friend! Become a Galley Buddy. It's a good deal for us, and a great deal for you. Our subscription service helps us ensure that we can support our writers and takes away some of the fear of pushing against literary boundaries. It also helps you ensure you get beautiful limited edition, collectible books by fine writers on tap. 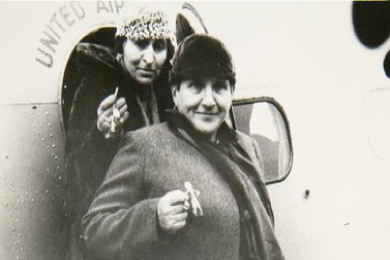 Secondly, please join The Singles Club so we can pay writers to write. Here's the blurb:

We have a fantastic subscription system set up for our Singles Club so that you now only have to make one payment to get hold of 12 stories. But how to go through the ins and outs of paypal payment systems without boring the dirtbox off you, I don't know. Probably the best thing to do is to head over to the relevant page on our site, where I've tried to give a brief, but to the point explanation, and to take it from there. The important things to know are that:

(1) Subscribing saves you the trouble of going to the site every month to get your fix of superb ebook literature – we'll just email you the files every month.

(2) Subscribing (so long as enough people do it) will enable us to start giving our authors money up front on for each story. Yes! We are going to pay people to write short stories. It's like the golden days of the 1920s. Only they'll be in electronic book format instead of Strand magazine… Anyway! You get the idea. This is a mighty fine way to keep authors doing what they do best – entertaining you.

Thirdly, donate to Galley Beggar Press and earn yet more of our gratitude, click here.

Fourthly, Elly and me wrote a book called Literary London. A lot of people have said very nice things about it, and it's available in our store. 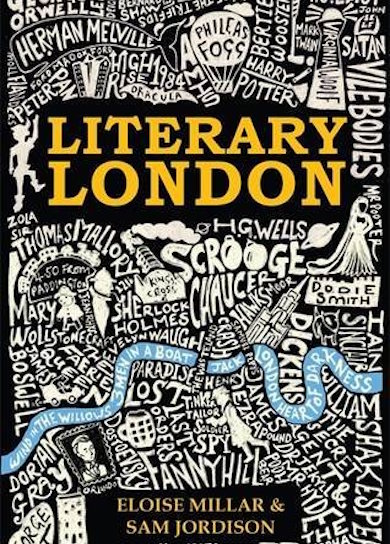 Fifthly: Oh my god, the new Slowdive song. I've also been enjoying the new Brian Eno record. And Ruins by Wolf People. And, did you read the Bruce Springsteen autobiography? What a man. He can write too, huh? If he hadn't been a genius he'd have made a decent rock critic.
Share it: